Edit: This page is being updated and combined with other pages. Please have patience as this process to re-write and update is not always fast.

The Mage's Inquisition Quest (GoC) is a great adventure with useful rewards. The rewards are so great that the quest itself must be completed with a lot of work, time, and in some instances, in groups.

This quest is split into 6 chapters, consisting of dungeons with creatures of various difficulties that yield key items needed for completion.

This guide has been separated into sections for an easier understanding of each individual area. Each section contains:

Each section also includes the location of the area on the world map (at the top) and the old walkthrough (at the bottom). Clicking on a Monster will bring you to their information page, which includes Stats (HP/Resists/Abilities/etc.) and suggested Tactics to use to defeat them.

Blighted Grove, near the dungeon Shame in Felucca, is considered the easiest of all the dungeons in the quest. It is the best place to start.

Sanctuary, located on the eastern side of the mountain that homes the dungeon Shame in Felucca, will be the second dungeon you will want to tackle in this adventure. The dungeon is filled with secret teleports to move around to different areas.

Labyrinth, accessed via the Grimswind Ruins in Malas, is a long maze dungeon that contains hidden teleporters that move you to various areas in the dungeon... Even backwards.

Minotaurs - There are three type. Captains, Scouts, and Regular. While all three can easily kill someone unprepared, the Scouts are by and far the most dangerous and will routinely one/two shot someone with 400+ HP. Sometimes Minotaurs will not drop any gold.

Rends - Angry little buggers that don't forget aggro. They hit hard, they're harder to kill, and not worth it to boot. They won't attack you, so just don't hit them by accident.

The Palace of Paroxysmus, northeast of Terathan Keep in Felucca, is a long dungeon with a poison river running through it.

Bedlam is a smaller dungeon accessed from Umbra, Malas, with areas holding the possibility of certain death.

Flesh Eating Dragon - A Dragon interred amongst a pit of bones within Bedlam. A fearsome foe that will one-shot even the most hearty of warriors. Best avoided, as no quest treasures stand to be gained from this beast.

Vrokan Guardians - The guardians to the entrance of Bedlam. Fight or flee, as these have no items relevant to your reason to venture to Bedlam, aside from gold.

The Prism of Light is located in Felucca on the isle of Nujel'm . It is a circular one way dungeon with teleporters to be used to gain further access in the dungeon.

(An expanded page on the Effusion Quest is in the works. Please refer to the link before this in the meantime.)

Once you have gathered the required items, you will need to offer each dungeon's items up separately. To do this you must gather "Collector Boxes" for the area in which you wish to obtain the gem from.

Head to the Excelsior Halls which is on the World Telepad in the "Custom" Section. Walk east and into the building to the North. Find Aerial the Collector Maker. Map View

Here you must speak the name of the dungeon you wish to get the collector box for. (This must be the dungeon's full name)

Once you have the pieces ready and your collector box in your backpack, it is now time for you to add the items from the dungeon into the collector box.

Upon adding the final piece from the specific dungeon, you will be instantly transported to the designated area for each individual dungeon. Walk North to the npc and he will take your collector box and give you a gem from the area you completed.

You must now wait 72 hours before you can fill another dungeon's collector box.

Warning: The item collector must be in your pack when entering this special room. If you add the final item to the collector while it is on the ground, in your bank box, or somewhere else, you will be transported but unable to trade for the Gem. All items in the collector are destroyed once the last one is placed, and you will have to start over on this dungeon.

Six Gems for a Seventh

Once you have claimed the gems for all 6 dungeons, it is time to use your 7th collector, the Gem Collector. To get the Gem Collector you must revisit Aerial the Collector Maker and say "Gem Collector" Place the 6 gems within, and you will trade one final time for The Gem of Completion. Congratulations you have completed the Mage's Inquisition Quest.

The Joys of Completion

The Gem of Completion is a blue/orange bracelet; when double-clicked, allows you to pick one of the GoC items. 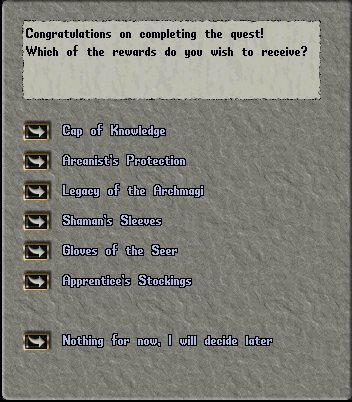