What is a stat scroll?

Stat scrolls are used to increase your maximum stats on your character. They come in +5 through +50 scrolls, in increments of 5. Warning Note: Using a stat scroll will not raise your individual stats (Str, Dex, Int) over 125, for that you need to purchase Individual Stat Scrolls from the Excelsior Dollar Reward Room in Trinsic.

How do I get a stat scroll?

To summon the Harrower:
- Go to Fel Destard and approach the far North wall (very near where the Harrower previously spawned).
- Approach the altar at the base of the stairs and say "Harrower"
- Collect the skulls into the quest book. This book lasts forever, but you cannot obtain another until you do the Harrower.

If, at this point, you are not ready to fight the Harrower, you may leave and return when you are ready and your participants have gathered at the base of the stairs.

When you are ready to begin the process to fight the Harrower:
- Go up the stairs, stand on the red teleporter tile and say "ready". You will then be teleported into a ticket booth.
- Once inside the ticket booth, you will pick up tickets from the table and hand them to those you wish to allow to attend your Harrower.
- Once all tickets have been given out, step onto the teleporter tile to move to the next section. If you are attending and have received a ticket, approach the red teleporter and say "ready" to be moved to the next section.
- Approach the blue teleporter tile and say "proceed". A portal will open for you and your attendees to the new Harrower area.

Attendees will approach a red teleporter tile to be assigned a ticket and moved into the Harrower preparation room. From this point, each person has 45 minutes total in the Harrower area.

When everyone is ready, they will go through the yellow gate. The Harrower will spawn when the host with the master ticket approaches the center of the spawn room.

When one's ticket expires, they are moved out of the Harrower area, to prevent anyone from lingering and interfering with someone else's spawn in the future. There is no hiding, stealthing, etc in the entry rooms where tickets are given out. There is also no bracelet of binding into the Harrower room.

A +5 to Individual Stat scroll is a scroll that can be purchased in the Excelsior Dollar Reward Room in Trinsic for 50 Excelsior Dollars (EDS). This Scroll Will increase the stat cap of one of your stats by 5 (Str, Dex or Int). The max an individual stat can be raised to is 150. The menu used for this method is pretty straightforward and easy to use.

Double click the scroll to bring up a menu, then select which stat cap you would like to raise by 5. 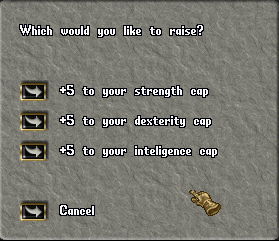 NOTE: Increasing the Strength cap from 125 to 150 will net you 12.5 HP (and UO doesn't round up, so its 12 HP really). There are two formulas for calculating the HP gained from your Strength.

The 250 ED spent to boost the Strength Cap to 150 may be better off spent towards a relayer instead, as you will gain more HP and other stats from the relayer, as opposed to 12 HP from boosting your cap.